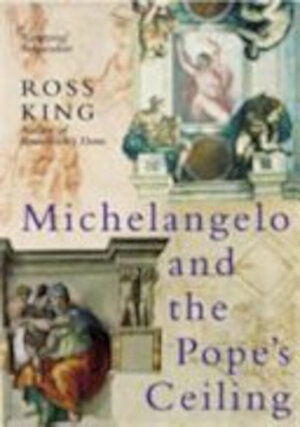 Michelangelo and the Pope's Ceiling

In 1508 Pope Julius II commissioned Michaeangelo to paint the ceiling of the Sistine Chapel. He had been advised against doing so. The apinting of the vaults was so difficult and Michaelangelo was so inexperienced in fresco that it was considered a folly. Indeed, Michaelangelo himself was reluctant for he considered himself primarily a sculptor rather than a painter. However, for the next four years he would labour over the vast ceiling, at first employing assistants and later, working alone, spending back-breaking hours with his face turned upwards. The result was one of the greatest masterpieces pf all time. "there is no other work to compare with this for excellence, nor could there be," wrote Vasari in his Lives of Artists.Ross King's fascinating new book tells the story of those four extraordinary years. Battling against ill health, financial difficulties, domestic problems and inadequate knowledge of teh art of fresco, Michaelangelo created figures so beautiful that, when they were unveiled in 1512, they stunned his onlookers. Modern anatomy has yet to find names for some of the muscles on his nudes, they are painted in such detail. From Michaelangelo's experiments with the composition of pigment and plaster to his bitter rivalry with Raphael, who was working on teh neighbouring Papel Apartments, Ross King paints a magnificent picture of day-to-day life on the Sistine scaffolding and outside in the upheaval of early sixteenth-century Rome.