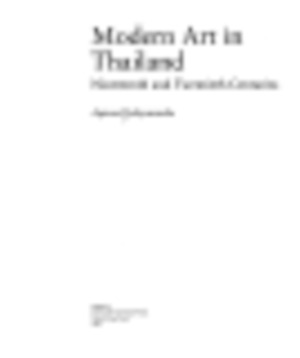 This book offers, for the first time, a comprehensive account of the development of modern art in Thailand. Its central focus is to trace the main thread of eclecticism that characterizes modern Thai art, and to show how foreign influences, as well as Buddhism, local traditions, and folk cultures served as catalysts in the development of styles. The book opens with a view of realist painting as it was introduced into Thailand. The synthesis of Chinese and Western influences on Thai architecture, mural paintings, decorative arts, and printmaking during the second half of the nineteenth century is discussed, followed by an account of the quest for reality, as expressed in photography, portraiture, and sculpture, in the early years of the twentieth century. Special attention is given in the early chapters to King Chulalongkorn, whose patronage played a major role in disseminating Western art in Bangkok, and to the Italian art teacher, Silpa Bhirasri, a pivotal figure in the institutional development of modern art in Thailand in the 1930s and 1940s. The book then follows the trajectory of modernism to the present day, tracing the adaptation of European art styles, the revival and re-examination of an authentic Thai cultural tradition, the impact of social and political events, and the importance of patronage and institutionalized art. These chapters are rich with new material gained from interviews with leading artists.