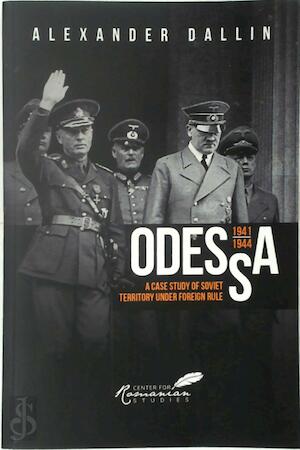 A Case Study of Soviet Territory under Foreign Rule

Odessa, 1941-1944 is a comprehensive study of the Romanian administration in Odessa and Transnistria during World War II. It draws a sharp contrast between occupation policies in Odessa and Transnistria, under Romanian administration, and those of Nazi-occupied areas of the Soviet Union. Originally prepared as a Rand Corporation report, it is essential reading for anyone interested in the occupation of Soviet territory during World War II and its consequences.

Alexander Dallin provides a detailed study of the Romanian administration in Transnistria, illustrating important aspects of the development of this Soviet territory after the removal of the Communist system. Dallin argues that "The relative success of the Romanians (in contrast to German-held areas of the USSR) supports the thesis that the specific nature of the occupation policy and behavior mattered a good deal in determining the response of the subject population." He adds that "the Transnistrian experiment rapidly gained popular confidence through higher living standards and an atmosphere of greater relaxation. The absence of terror and forced labor, and greater opportunities for self-expression, both economic and cultural, go far to explain the overwhelming popular preference for Romanian over German rule."

A noted expert in Soviet history, Alexander Dallin (1924-2000) was a former president of the American Association for the Advancement of Slavic Studies and professor emeritus of international history and political science at Stanford University in California. His other books include German Rule in Russia, 1941-1945. The book includes an introduction by Larry L. Watts, an American specialist on the history of Romania during World War II.