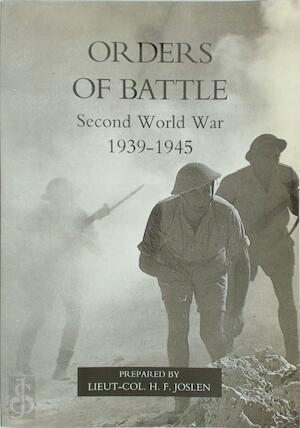 Complete Order of Battle of British Army and Colonial Formations and Units in all theatres of war. Details include composition, subordinations, theatres in which served, names of commanders all with dates, including those of any changes. War establishment of all types of divisions and brigades with details of changes authorised during the war. Included is a supplement listing all formations and units engaged in the Battle of El Alamein and the D Day Landings in Normandy on 6/7 June 1944. A monumental work of reference, originally published in a limited edition, and virtually unobtainable since then. The original 2 volumes are published as one volume containing all that was in the original two volumes as follows: Volume I: Divisions Composition and War Establishment of Divisions Armoured, Cavalry, Tank and Motor Machine Gun Brigades Volume II: Infantry Brigades Parachute and Airlanding Brigades Colonial Brigades Miscellaneous Brigades (including Special Forces) GHQ., Army Group, Army and Corps Troops British Units which served under Indian Army Command Formations and Units engaged in the Battle of El Alamein and The Assault Landings in Normandy.