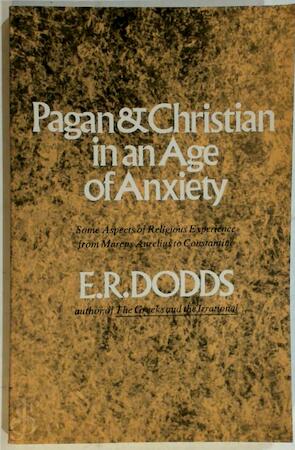 Pagan and Christian in an Age of Anxiety

Examines the philosophical and spiritual climate of the Roman Empire during the period between the accession of Marcus Aurelius and the conversion of Constantine. During this period, material decline was steepest and the ferment of new religious feelings most intense. It was an "age of anxiety" in both its material and its moral insecurity. The pax Romana was coming to an end and being succeeded by invasions, epidemics, and civil disorder. Dodds discusses general attitudes to the world and the human condition in the early Christian centuries, and goes on to analyze specific types of daemonic and religious experiences. He also considers both pagan views of Christianity and Christian views of paganism as they emerge in the literature of the time.--From publisher description.