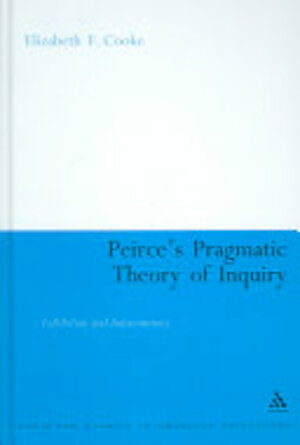 The philosophy of Charles Sanders Peirce (1839-1914) is very important at every stage of the history of modern American thought. It informs William James's evolutionary metaphysics, John Dewey's theory of logic, W.V.O. Quine's naturalism, and Richard Rorty's notion of the Linguistic Turn. Similarly, many Continental philosophers, like Jürgen Habermas, Karl-Otto Apel, Jacques Derrida, and Umberto Eco, have developed Peirce's semiotic logic as central to their own philosophical views. Yet until now there has been a yawning gap in the literature on what is arguably the most essential idea in the entire Peircean corpus, namely his "fallibilism." The basic idea of fallibilism is that all knowledge claims, including those metaphysical, methodological, introspective, and even mathematical claims - all of these remain uncertain, provisional, merely fallible conjectures.

As Elizabeth Cooke explains in Peirce's Pragmatic Theory of Inquiry, one long-standing concern with the idea of fallibilism is that it might all too easily slide into "skepticism." And this would certainly undermine the overall project of making Peirce's fallibilism the linchpin for any realistic pragmatism. So, it is essential to show Peirce's philosophy does not require any claims to certitude, in order to keep his fallibilism from falling into skepticism or contextualism. Cooke's solution to this problem is to interpret Peirce as having reconceived knowledge - traditionally defined as "foundational" and even "static" - as a dynamic process of inquiry, one which evolves within a larger ontological process of evolution. Her book will be of great interest not only to Peirce and Pragmatism specialists but also to contemporary epistemologists more generally.