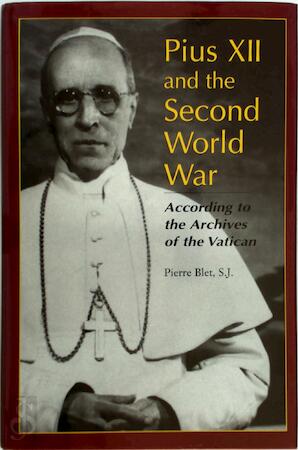 According to the Archives of the Vatican

This book hopes to resolve but in the end may add to the controversy whether Pius XII was cold and unfeeling toward the Jews during World War II. In answer to the charge, the Vatican diplomatic archives for that period were opened over thirty years ago. The twelve volumes published in Italian were largely ignored, though the controversy continued. Here now, available in English for the first time, is a one-volume summary recently written by one of the original historians to work on the archives. This detailed chronological report follows day by day and sometimes hour by hour the work of Pius XII and his associates from May 1939, when the Germans marched into Prague just three days after he was raised to the papacy, until the very end of the war. Included are his public statements, speeches, messages, and letters exchanged with civil and ecclesiastical dignitaries, as well as details of his secret maneuvering to forestall the ruin of Europe and to offer relief where possible. The Pope faced an untenable situation. Recorded are both his own doubts about the extent of his actions as well as the vigorous praise of contemporary statesmen. Previous charges against Pius XII have been based on scanty evidence. Here at last is evidence, yet each side will undoubtedly find in it fuel for its own argument. The book is a revelation, showing the hitherto unknown efforts the Pope took to advance peace, but the haunting question remains: did he do enough? Only readers of this book will be able to judge. This is a critical title for church historians, holocaust scholars, World War II historians, and anyone involved in the Jewish-Christian dialogue.