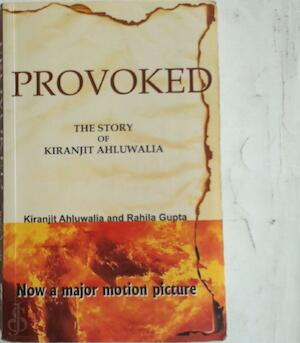 Provoked : The Story Of Kiranjit Ahluwalia

Now a major motion picture starring Aishwarya Rai as Kiranjit, Nandita Das, Naveen Andrews, Miranda Richardson, Robbie Coltrane and a host of other stars. Born into a privileged family in India, Kiranjit Ahluwalia came to England in 1979 to be married to a man she hardly knew. The next ten years were to be a nightmare of almost daily, physical, mental and sexual violence at the hands of her husband. There was no one she could turn to for help and support. Domestic violence was a taboo subject for many Asians In Britain, and family honour - izzat - was at stake for anyone who went outside the family for help. Kiranjit, in desperation, killed the man who had tortured her for so long. Bewildered, poorly advised and speaking little English, she was sentenced to life imprisonment for murder. In prison, she unexpectedly found a degree of freedom she had never known in the outside world. For the first time she was safe from beatings and abuse, and was able to enjoy the friendship and solidarity of other women who were in a similar situation. Meanwhile, a campaign organised by Southall Black Sisters, a women's group operating on a shoestring budget to draw attention to her plight was gathering momentum. Media coverage of her plight had made Kiranjit something of a "cause celebre", and she attracted many prominent supporters, including Diana, Princess of Wales who urged her to write this book. She was released amid scenes of rejoicing in September 1992 when her conviction for murder was reduced to manslaughter on appeal. Regina v Ahluwalia has become legal history because it was a landmark ruling that paved the way for other women in Kiranjit's situation to win justice.