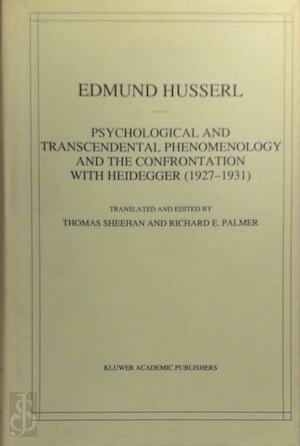 Psychological and Transcendental Phenomenology and the Confrontation with Heidegger (1927–1931)

Thomas Sheehan and Richard E. Palmer The materials translated in the body of this volume date from 1927 through 1931. The Encyclopaedia Britannica Article and the Amsterdam Lectures were written by Edmund Hussed (with a short contribution by Martin Heideg ger) between September 1927 and April 1928, and Hussed's marginal notes to Sein und Zeit and Kant und das Problem der Metaphysik were made between 1927 and 1929. The appendices to this volume contain texts from both Hussed and Heidegger, and date from 1929 through 1931. As a whole these materials not only document Hussed's thinking as he approached retirement and emeri tus status (March 31, 1928) but also shed light on the philosophical chasm that was widening at that time between Hussed and his then colleague and protege, Martin Heidegger. 1. The Encyclopaedia Britannica Article Between September and early December 1927, Hussed, under contract, composed an introduction to phenomenology that was to be published in the fourteenth edition ofthe Encyclopaedia Britannica (1929). Hussed's text went through four versions (which we call Drafts A, B, C, and D) and two editorial condensations by other hands (which we call Drafts E and F). Throughout this volume those five texts as a whole are referred to as "the EB Article" or simply "the Article. " Hussed's own final version of the Article, Draft D, was never published of it appeared only in 1962.