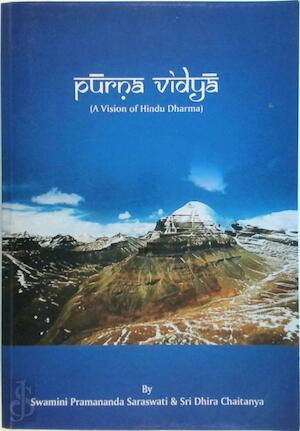 Purna Vidya - A Vision of Hindu Dharma is a comprehensive book that provides an insightful overview of the Religious and Cultural tradition of Hinduism, traditionally known as Sanatana Dharma. The book begins with a detailed analysis of Universal Values, followed by the Vedic vision of the Lord and the manifold ways of worship of the varied forms in which Lord is invoked. The principles that underlie various religious practices in homes and temples are explained as are religious disciplines such as fasting, pilgrimage and so on. Topics such as the spiritual teaching tradition, saints and women in Vedic culture are covered. The spiritual insights of Hindu tradition that is alive in the variety of cultural forms such as food, dress, language and so on along with art forms like music and dance are also explained with their accompanying literature.The book also provides a overview of the eighteen fold body of literature that includes the Vedas, Vedangas, Upavedas and Upangas-that form the quintessence of Vedic literature and includes topics such as Grammar, Astrology, Prosody, Logic, Puranas, Vastu shastra, Ayurveda, Gandharva veda and so on. Many essential topics such as Karma Hindu Samskaras (sacraments) and topics such as role of psychology in spiritual pursuit are also addressed. This is a well thought out and executed book that will serve as a much sought after resource material for an aspirant, a parent, teacher or anyone interested in the religious tradition and culture of Hinduism.