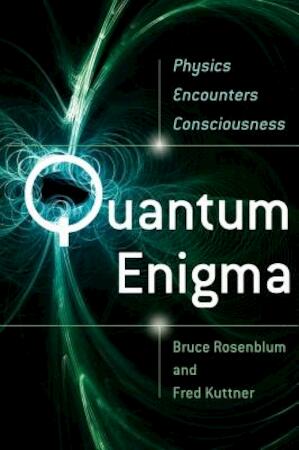 In trying to understand the atom, physicists built quantum mechanics and found, to their embarrassment, that their theory intimately connects consciousness with the physical world. Quantum Enigma explores what that implies and why some founders of the theory became the foremost objectors to it. Authors Bruce Rosenblum and Fred Kuttner explain all of this in non-technical terms with help from some fanciful stories and anecdotes about the theory's developers. They present the quantum mystery honestly, with an emphasis on what is and what is not speculation. Quantum Enigma's description of the experimental quantum facts, and the quantum theory explaining them, is undisputed. Interpreting what it all means, however, is controversial. Every interpretation of quantum physics encounters consciousness. Rosenblum and Kuttner therefore turn to exploring consciousness itself--and encounter quantum physics. Free will and anthropic principles become crucial issues, and the connection of consciousness with the cosmos suggested by some leading quantum cosmologists is mind-blowing. Readers are brought to a boundary where the particular expertise of physicists is no longer a sure guide. They will find, instead, the facts and hints provided by quantum mechanics and the ability to speculate for themselves.

"A remarkable and readable presentation of the basic mysteries of science, our universe, and human life. Critically important problems in our understanding are interestingly discussed with perception, depth, and careful objectivity."
--Charles Townes, winner of the Nobel Prize in Physics

"Lively and thought-provoking."
--The Washington Times

"This book is unique. The clearest expositions I have ever seen."
--George Greenstein, Professor of Astronomy, Amherst College

"An immensely important and exciting book."
--Raymond Chester Russ, editor of Journal of Mind and Behavior