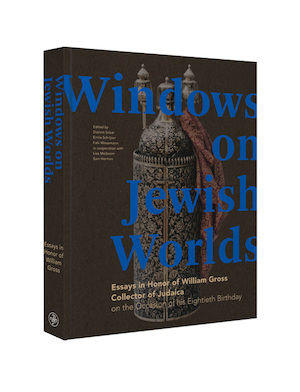 Essays in Honor of William Gross, Collector of Judaica

This volume celebrates the collecting effort of perhaps the greatest of all contemporary collectors of Judaica, William Gross, of Tel Aviv. It appears on the occasion of his eightieth birthday and contains discussions of a variety of works from the Gross Family Collection, authored by friends and colleagues from the world of Jewish museums and Jewish studies. Items discussed include Hebrew manuscripts and printed works, Jewish ceremonial silver, textiles, amulets, medals and Kabbalistic texts. The articles are illustrated richly, mostly with items from the Gross Family Collection. William Gross has always cherished a very personal perspective on the items in his collection. For him Jewish life and ritual, out of which all of these items grew, is multi-faceted. He has often claimed that each individual item in his collection constitutes a window through which one can view and learn about the Jews of a particular place and time. He believes that no Judaic object can be separated both from its Jewish roots and from the more general context of the political, social, economic and artistic environment in which the Jews, who ordered, used and venerated those objects, lived. These roots and this context are what give substance to these objects, which are often collectively referred to as Jewish Art.