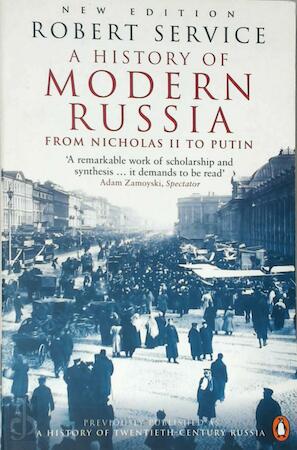 A history of modern Russia

From Nicholas II To Putin

Russia had an extraordinary twentieth century, undergoing immense upheaval and transformation. Now brought up to 2002, Robert Services's history provides a superb panoramic viewpoint on a country whose Soviet past has encompassed revolution, civil war and mass terror, as well as two world wars. He explores the complex, changing interaction between rulers and ruled from Nicholas II, Lenin and Stalin through to Gorbachev, Yeltsin and Putin. This new edition also discusses continuing economic and social difficulties at the beginning of the twenty-first century, the military campaign in Chechnya, Russia's reduced role on the world stage and Putin's determination to restore its dignity as a nation. Robert Service also shows how, despite recent years of de-communization, the seven decades of communist rule which penetrated every aspect of life in state, economy and society still continue to influence Russia today as it faces an uncertain future.