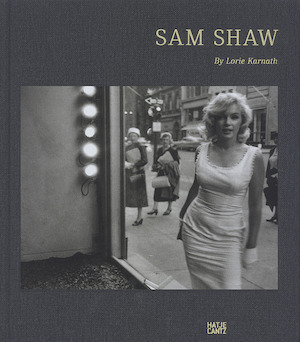 The amiably spontaneous pictures taken by Sam Shaw (1912–1999) are well known: the native and life-long New Yorker shot countless cover photographs for Life and Look in the fifties and sixties, and later also took the still images for the films he produced himself. Shaw and Marilyn Monroe were friends, and he captured her unique aura in countless unpretentious portraits. During the filming of The Seven Year Itch, he staged his probably best known picture with her: Marilyn standing over a subway grate, a waft of air blowing the skirt of her white dress above her knees.Sam Shaw also portrayed almost every major Hollywood star of his day, consistently capturing the moment in his quest for truthfulness, with enthusiasm and from a new perspective, just as if he were selecting the camera angle for a film sequence. The researcher and author Lorie Karnath, the book’s editor, enhances the publication with very personal memories of her long-time friend.