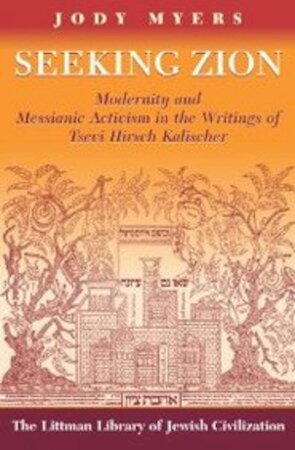 Modernity and Messianic Activity in the Writings of Tsevi Hirsch Kalischer

Tsevi Hirsch Kalischer (1795-1874) was one of the first Orthodox rabbis to advocate direct political action in order to radically transform Jewish life. Kalischer lived in a time when Jewish tradition was increasingly challenged by rational thought and social integration. Applying his knowledge of rabbinic literature to the unusual historical events unfolding around him, he became convinced that behind the rise of individual Jews to great power was a divine plan to prepare the way for messianic redemption. Kalischer anticipated that in his own lifetime he would see the ingathering of the Jews, the renewed cultivation of the land of Israel, and the restoration of sacrificial worship. This would be achieved not through supernatural agency but by the efforts of the Jews themselves, in the spirit of the time. The Jewish people was obligated by God to 'seek Zion'. Kalischer began his quest as early as 1836 when he approached the banker Amschel Mayer Rothschild with a plan to acquire Jerusalem and revive sacrificial worship. However, lacking Rothschild's co-operation and the approval of his rabbinic colleagues, Kalischer set aside his dream for almost twenty years. In 1862, spurred to action by the granting of equal rights to Jews and European assistance to the Jews of Palestine, he published his theories in Derishat tsiyon (Seeking Zion). From then until his death, Kalischer promoted and raised funds on behalf of the establishment of agricultural communes in Palestine. In this book Jody Myers explores for the first time the full range of Kalischer's writings-philosophical essays, correspondence, halakhic research, and biblical exegesis-presenting and critically analysing his groundbreaking formulation of modern messianic activism, which paved the way for later religious Zionism. She shows how Kalischer's approach marks a pivotal transition in the history of the messianic idea, and explains how he designed his arguments to appeal both to religious Jews and to the newly emancipated Jews of western Europe who, grateful for their own fortune, wanted to assist the impoverished Jews of the Middle East. At the same time, his proposals generated controversy and uncovered the growing schisms between Jews in modern times. Through Kalischer's eyes, the reader gains a fascinating perspective on what it means to be both religious and modern.