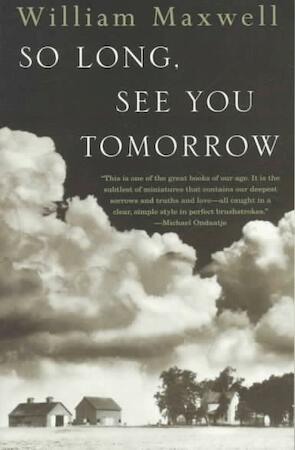 So Long, See You Tomorrow

In this magically evocative novel, William Maxwell explores the enigmatic gravity of the past, which compels us to keep explaining it even as it makes liars out of us every time we try. On a winter morning in the 1920s, a shot rings out on a farm in rural Illinois. A man named Lloyd Wilson has been killed. And the tenuous friendship between two lonely teenagers—one privileged yet neglected, the other a troubled farm boy—has been shattered.Fifty years later, one of those boys—now a grown man—tries to reconstruct the events that led up to the murder. In doing so, he is inevitably drawn back to his lost friend Cletus, who has the misfortune of being the son of Wilson's killer and who in the months before witnessed things that Maxwell's narrator can only guess at. Out of memory and imagination, the surmises of children and the destructive passions of their parents, Maxwell creates a luminous American classic of youth and loss.

"So Long, See You Tomorrow" is ook verkrijgbaar als