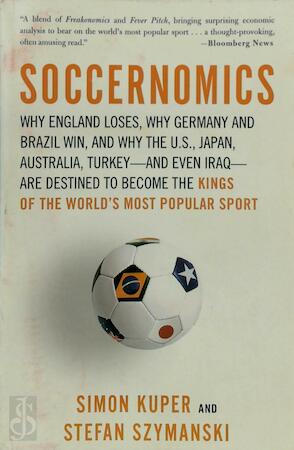 1. Driving with a dashboard: In search of new truths about soccer -- Part 1. The clubs: Racism, stupidity, bad transfers, capital cities, the Leicester fairy tale and what actually happened in that penalty shoot-out in Moscow -- 2. Gentlemen prefer blonds: How to avoid silly mistakes in the transfer market -- 3. The worst business in the world: Why soccer clubs haven't made money -- 4. Safer than the Bank of England: Why soccer clubs almost never disappear -- 5. Crooked business: Soccer's corruption and the history of tech -- 6. A decent business at last? Be careful what you wish for -- 7. Need not apply: Does soccer discriminate against black people? -- 8. Do coaches matter? The cult of the white manager -- 9. The secret of Claude Makelele: How "Match Data" are changing the game on the field -- 10. The economist's fear of the penalty kick: Are penalties cosmically unfair, or only if you are Nicolas Anelka? -- 11. The suburban newsagents: City sizes and soccer prizes -- Part 2. The fans: Loyalty, suicides, and happiness -- 12. A fan's suicide notes: Do people jump off buildings when their teams lose? -- 13. Happiness: Why hosting a World Cup is good for you -- 14. Football versus football: A tale of two empires -- 15. Are soccer fans polygamists? A critique of the Nick Hornby model of fandom -- Part 3. Countries: Rich and poor, Tom Thumb, England, Spain, Palestine, and the champions of the future -- 16. The curse of poverty: Why poor countries are poor at sports -- 17. Why England loses and other Europeans win: Beaten by a dishwasher -- 18. Made in Amsterdam: The rise of Spain and the triumph of European knowledge networks -- 19. Tom Thumb: The best little soccer country on earth -- 20. Core to periphery: The future map of global soccer -- 21. The future: The best of times--and the Smartphone