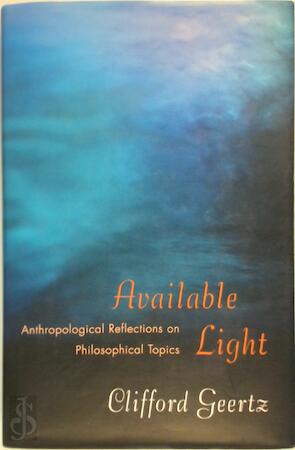 Clifford Geertz, one of the most influential thinkers of our time, here discusses some of the most urgent issues facing intellectuals today. In this collection of personal and revealing essays, he explores the nature of his anthropological work in relation to a broader public, serving as the foremost spokesperson of his generation of scholars, those who came of age after World War II. His reflections are written in a style that both entertains and disconcerts, as they engage us in topics ranging from moral relativism to the relationship between cultural and psychological differences, from the diversity and tension among activist faiths to "ethnic conflict" in today's politics.

Geertz, who once considered a career in philosophy, begins by explaining how he got swept into the revolutionary movement of symbolic anthropology. At that point, his work began to encompass not only the ethnography of groups in Southeast Asia and North Africa, but also the study of how meaning is made in all cultures--or, to use his phrase, to explore the "frames of meaning" in which people everywhere live out their lives. His philosophical orientation helped him to establish the role of anthropology within broader intellectual circles and led him to address the work of such leading thinkers as Charles Taylor, Thomas Kuhn, William James, and Jerome Bruner. In this volume, Geertz comments on their work as he explores questions in political philosophy, psychology, and religion that have intrigued him throughout his career but that now hold particular relevance in light of postmodernist thinking and multiculturalism. Available Light offers insightful discussions of concepts such as nation, identity, country, and self, with a reminder that like symbols in general, their meanings are not categorically fixed but grow and change through time and place.

This book treats the reader to an analysis of the American intellectual climate by someone who did much to shape it. One can read Available Light both for its revelation of public culture in its dynamic, evolving forms and for the story it tells about the remarkable adventures of an innovator during the "golden years" of American academia.