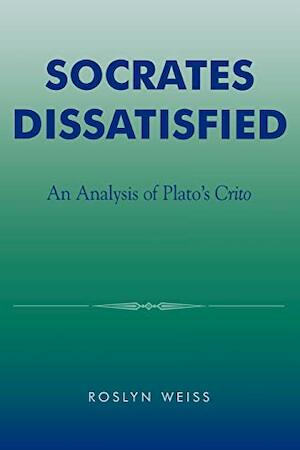 For whom do the personified Laws in the latter part of the Crito speak? Who is it in the dialogue who demands of the citizen utter submission to whatever the city bids whether right or wrong, just or unjust? If it is Socrates for whom the Laws speak and if it is he who sets the city's commands above the considered moral judgement of the individual, what, one must wonder, has become of the radically independent Socrates of the Apologywho defiantly resists calls to injustice regardless of their source? In Socrates Dissatisfied, Weiss argues against the prevailing view that the Laws are Socrates' spokesmen. She reveals and explores many indications that Socrates and the Laws are, both in style and in substance, adversaries: whereas the Laws are rhetoricians who defend their own absolute authority, Socrates is a dialectician who defends-in the Crito no less than in the Apology-the overriding claim of each individual's own reason when assiduously applied to questions of justice. It is only for the sake of an unphilosophical Crito, Weiss suggests, that Socrates invents the speech of the Laws; he resorts to rhetoric in a desperate attempt to save Crito's soul even as Crito seeks to save his body. Indeed, as Weiss shows, Socrates' own philosophical reasons for remaining in prison rather than escaping as Crito wishes are clearly and fully articulated before the speech of the Laws begins. Deft, provocative, and compelling, with new translations providing groundbreaking interpretations of key passages, Socrates Dissatisfied challenges the standard conception of the history of political thought: if its argument is correct, political philosophy begins not with the assertion of the supremacy of the state over the citizen, but with the affirmation of the primacy of the citizen in his deliberative exercise of reason with respect to justice. Socrates Dissatisfiedis vital reading for students and scholars of ancient philosophy, classics, and political philosophy.