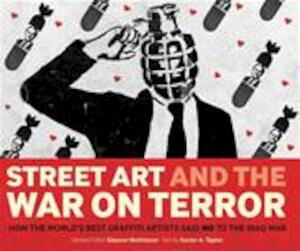 Street art and the War on Terror

Bringing together a stunning array of antiwar, anti-Bush, and anti-Blair graffiti from the United States, Canada, Europe, Middle East, Japan, and Australia, this gritty, controversial collection captures many unique images which have survived only a few hours between execution and clean-up. Including a chronology of opposition to the war organized by continent, and commentaries by the graffiti artists themselves, this work constitutes an essential record of political opposition since 9/11. Every major city is featured, including London, New York City, Paris, Tokyo, Milan, Baghdad, Tehran, Berlin, Munich, Marseilles, San Francisco, Los Angeles, Sydney, Melbourne, and more.