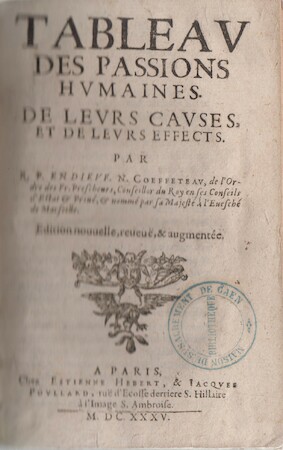 Nicolas Coeffeteau (1574-1623) was a prominent French theologian, poet and historian. He was celebrated during his lifetime as a particularly beautiful prose stylist and an articulate critic of Protestant reformation. His work on human emotions, which was first published in 1620, was a true best seller in its time. In his treatise, Coeffeteau distinguishes 11 passions: anger, love, hatred, desire, flight, voluptuousness, hope, despair, pain, audacity and fear. Despite the numerous editions (there are more than 20), this remains a difficult work to find in good condition.