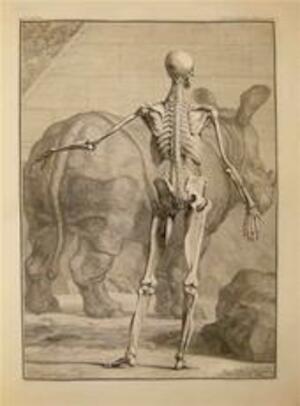 2 vols. Large (ca. 70 cm. tall) folio. The plate volume contains the complete set of 117 plates as engraved by J. Wandelaar for the Albinus editions, (including the two engraved text pages of “Ossium humanorum”). The text corresponds with Sceleti et musculorum. The 8 plates for Uteri mulieris were issued without separate text sheets. Rather, the text is engraved on the plates.
The atlas volume, quite literally showing each and every bone and muscle in the human body, contains both the plates for Tabulae Sceleti et Musculorum and the Tabulae Ossium (with its two appendages - Vasis Chyliferi and Uteri mulieris). Tabulae Ossium is “a continuation of the 'Tabulae sceleti' and contains life-seized representations of all the different bones of the adult human being"(Choulant-Frank 281). The plates were drawn and angraved by Jan Wandelaer, a pupil of Jacob Fokema and Guillem van der Gouwen, as well as the painter Gerard de Lairesse (who was responsible for the drawings for Bidloo?s atlas). Before his work for Albinus, Wandelaer worked for Friedrich Ruysch. Albinus, however, created an opportunity for Wandelaer to fully express his drawing and engraving talents. Wandelaer worked with Albinus from 1721 until Wanderlaer´s death in 1754, after which Albinus is said to have gone through a period of severe despondency and depression. These plates are the result of an exceptional collaboration between the physician and the artist. Norman 29: “among the most artistically perfect of anatomical atlases ... Wandelaar placed his skeletons and musclemen against lush ornamental backgrounds to give them the illusion of vitality, using contrasts of mass and light to produce a three-dimensiol effect. The most famous plate in the atlas depicts a skeletal figure standing in front of an enormous grazing rhinoceros, sketched by Wandelaar from the first living specimen in Europe, which had arrived at Amsterdam zoo in 1741”.
While Tabulae sceleti et musculorum is seen as Albinus? magnum opus, the additional material in this collection offers a wealth of similar material, all engraved to the same high standard as Sceleti et musculorum.
Ref. *Graesse I, 58 *Brunet I, 143 *Choulant-Frank 276-283 *Wellcome II 26

In modern half vellum with marbled boards, parts of the original spine retained. An excellent, clean and bright copy. The title restored (with loss of lettering of the author's name), the first few plates (titles etc.) a bit grubby, and some scattered light foxing.