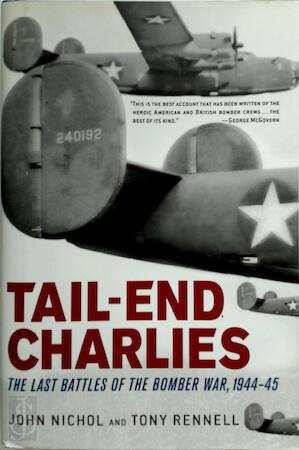 Night after night they stifled their fears and flew through flak and packs of enemy fighters to drop the bombs that would demolish the Third Reich. The airmen of the United States 8th Army Air ForceAmerican and British Bomber Command were among the greatest heroes of the Second World War, defying Hitler in the darkest early days of the war and taking the battle to the German homeland when no one else would.
Toward the end of the conflict, too, they continued to sacrifice their lives to shatter an enemy sworn never to surrender. Blasted out of the sky in an instant or bailing out from burning aircraft to drop helplessly into hostile hands, they would die in their tens of thousands to ensure the enemy's defeat. Especially vulnerable were the "tail-end Charlies"---for the Americans, which meant two things: the gunners who flew countless missions in a plexiglass bubble at the back of the bomber, and the last bomber in the formation who ended up flying through the most hell, and for the British, the rear-gunners who flew operations in a Plexiglas bubble at the back of the bomber.
Following their groundbreaking revelations about the ordeals suffered by Allied prisoners of war in their bestselling book, The Last Escape, John Nichol and Tony Rennell tell the astonishing and deeply moving story of the controversial last battles in the skies of Germany through the eyes of the forgotten heroes who fought them. "This is the best account that has been written of the heroic American and British bomber crews . . . the best of its kind."
---George McGovern "Rivaling the best of Stephen Ambrose's work, Tail-End Charlies gives a breathtakingly intimate look at the lives, loves, and deaths of the brave airmen of the greatest generation. This fascinating book is as valuable for its stories of joyous life on the ground as it is for its sobering tales of death in the air. You see the whole picture of the war here from the eyes of the strong young men who fought it."
---Walter J. Boyne, bestselling author of Beyond the Wild Blue

"Adds new dimensions to the saga of the air war in Europe. The eyewitness accounts, reported within the context of the battle against Nazi Germany, provide a sense of the ordeals, the terror, the gore, and the heroism of ordinary men thrust into the savagery of aerial combat."
---Gerald Astor, author of The Mighty Eighth