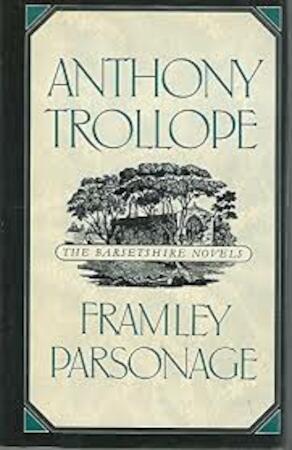 "Trollope’s panoramic, six volume portrayal of the professional and landed classes of Victorian England, the Barsetshire Novels, are as a group one of the great works of 19th-century English fiction. These novels – the first serial fiction in English literature – follow the intrigues of ambition and love in the cathedral town of Barsetshire. Framley Parsonage, the fourth of the novels, was immediately popular when it appeared in 1860. It made Trollope’s name and gained him the large reading public which he was never to lose. The main figure in the novel is Mark Robarts, a young clergyman, who offends his patroness (Lady Lufton) and other upholders of tradition by allowing himself to be influenced by the disreputable Duke of Omnium and the unscrupulous Mr. Sowerby. The situation is all the more unfortunate as Lord Lufton, the son of Lady Lufton, wishes to marry Mark’s sister Lucy. Trollope’s characters are portrayed with great subtlety showing how the old values of the Barsetshire community were being undermined by the new 'fast set'."--Publisher.