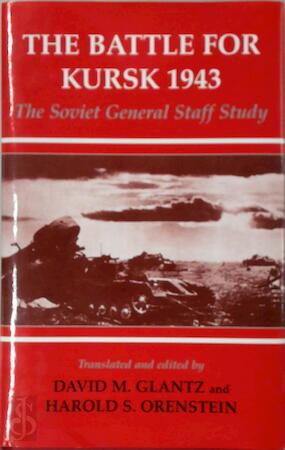 This volume contains an unprecedented level of detail about the Red Army's preparation for and conduct of the famous Battle of Kursk. Prepared by the Red Army General staff in 1944 from combat reports and other top-secret archive materials, the work is an eminently practical and candid document, which was written to educate the Red Army in the intricacies, demands and pitfalls of modern warfare. As a treasure trove of fresh material, this book addresses aspects of the battle that have puzzled commentators since 1943. It provides new information on subjects ranging from overall Soviet strategic intent and military planning, engineer preparation of the battlefield, and the oft-neglected question of logistical support. Juxtaposed with the vivid details of the struggle leading up to the combat crescendo at Ponyri and Prokhorovka are such unusual matters as the employment of remote-controlled mines, electrified barbed wire and ant-tank dogs. The Battle for Kursk 1943 opens up new horizons on the operations of the Red Army at Kursk, the nature of the war on the German Eastern Front, and, in general terms, the new range of horrors that have characterised warfare in the twentieth century.