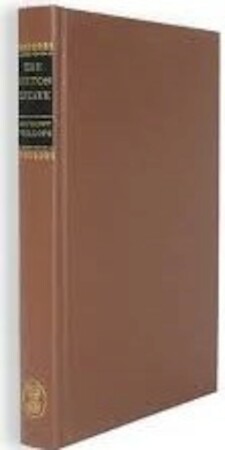 The Belton Estate is vintage Trollope, and possibly the subtlest of his novels. Written in 1865 and published in book form the following year, it tells the deceptively simple tale of Clara Amedroz. Following the suicide of her worthless brother and the death of her neurotic father, the entail of her home – the eponymous Belton Estate – passes to a distant cousin, the farmer Will Belton. Rejecting his impetuous proposal of marriage in favour of the MP, Captain Aylmer, Clara finds that the man she has chosen is, though a gentleman, both dull and unimaginative; worse still, he has a mother who is demanding and overbearing: ‘There is nothing so irritating to an engaged young lady as counsel from her intended husband’s mamma.’ Clara’s courage and indomitability help her to survive a difficult (and amusing) confrontation with her intended mother-in-law, which points up the central theme of the book: the obstacles facing a young girl, without fortune or property, on her path towards a happy and successful marriage; and the dependence such a girl has upon her prospective husband. This notion of dependence, and the difficulties of being a woman in a world made by men is mirrored elsewhere in the novel. Clara’s aunt, Mrs Winterfield, is expected to leave her fortune to her niece; yet she misguidedly bequeaths it instead to the indifferent Captain Aylmer after extracting a promise from him that he will marry Clara. The intention is uncompromising: the Captain will manage the money and Clara. And there are the Askertons, friends of Clara who live in a cottage on the estate. They have to endure social ostracism and malicious gossip because they left India together before Mary Askerton, previously married to a drunkard, was free to marry again: they went against convention. The story of The Belton Estate is subtly explored. Trollope was writing about real people and ordinary lives: there are no pantomime scoundrels, no melodramatic developments. The novel is an attack – albeit of the gentlest kind – on dull acceptance of conventional mores, explored through the eyes of the independent Clara.