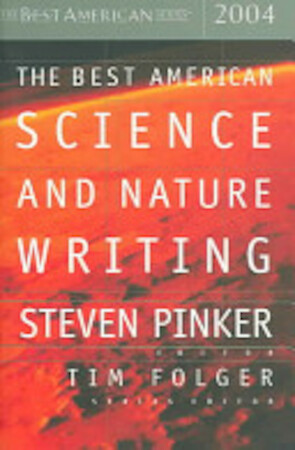 In his introduction to The Best American Science and Nature Writing 2004, Steven Pinker writes that the best science writing "gives readers the blissful click, the satisfying aha!, of seeing a puzzling phenomenon explained." Here to deliver the blissful click are many of the most "eclectic, provocative" (Entertainment Weekly) science and nature essays written in 2003. Geoffrey Nunberg turns to linguistics to expose the grammar police, Scott Antran questions received wisdom regarding the root causes of terrorism, and Peggy Orenstein shows that trends in baby names are not inspired by . . . just about any external cause.
Straight from the Cape Codder comes Mike O'Connor's "Ask the Bird Folks," from a weekly column that strikes a tone far from, as Steven Pinker puts it, "the worshipful sonorities found in much nature writing." Also on the creature front, Meredith Small shares with readers the pleasures of primatology (while for the first time explaining satisfactorily why primates groom), and Eric Scigliano gives us the eerie, and eerily intelligent, world of octopuses. (Read Steven Pinker if you aren't convinced that the plural of octopus is octopuses.) Atul Gawande profiles the great innovative surgeon Francis Moore, a man who essentially remade modern surgery -- and then could not live with the consequences -- and Jennet Conant captures the engaging, irreverent, and ever-provocative James Watson. Chet Raymo's musing on the modern universe story gives elegant insight into the cosmic place of physics, chemistry, and biology -- but not before first harking back to the days when "boys took physics (and went on to become engineers and automobile mechanics), girls took biology (and became nurses and homemakers), and nobody took chemistry if they could help it (except a few nerds who wanted to make stink bombs)."