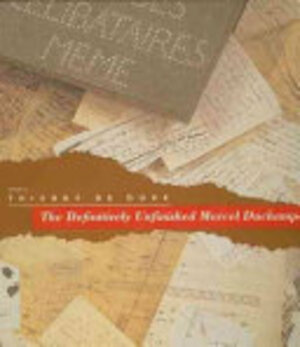 The Duchamp scholars represented here are the leading European and American critics of their generation - a number of whom have staked out opposing territories, making for a particularly animated critique of this fascinating artist and his provocative work.

William Camfield and Thierry de Duve investigate the events that led to the creation of Duchamp's infamous Fountain. Jean Suquet's rigorous yet poetic reading of the Large Glass appears here in English for the first time, as does Andre Gervais's exhilarating voyage through Duchamp's puns, aphorisms, and wordplays.

Carol James offers a fresh interpretation of Duchamp's late works as readymades. With an eye on today's art practices and theoretical debates, Craig Adcock and Rosalind Krauss examine to what extent scientific models explain Duchamp's art or are challenged by it. And Molly Nesbit uncovers important evidence of how the gender-based teaching of drawing in the Third Republic might have nurtured Duchamp's - or Rrose Selavy's - peculiar use of mechanical drawing.

Copublished with the Nova Scotia College of Art and Design.