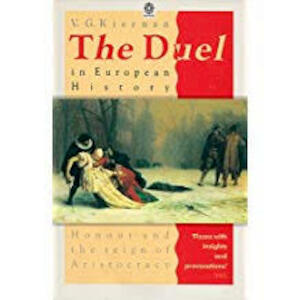 The duel in European history

The romance and drama of the duel has made it an enduring attraction in novels, plays, and operas; but it takes on a deeper significance when considered in its social, evolutionary setting. From medieval times, the privilege of duelling was regarded as a badge of rank, an assertion of preeminence by Europe's dominant classes. This book describes the evolution of the duel from its medieval origins to the early 20th century. It also looks at the opinions about duelling in different areas and historical eras, as reflected in legislation, church pronouncements, and the works of writers such as Montesquieu and Walter Scott. Kiernan discusses the duel as something unique to Europe and its colonies, its practice in Ireland and Scotland compared with English practice, what women thought of it, and how it contributed to the development of an officer corps, throwing new light on the long ascendancy of aristocratic classes and their values in European history.