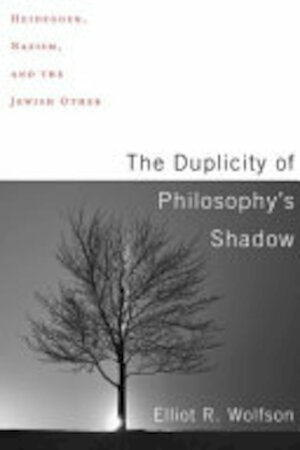 The Duplicity of Philosophy's Shadow

Martin Heidegger (1889-1976) is considered one of the most influential philosophers of the twentieth century in spite of his well-known transgressions--his complicity with National Socialism and his inability to show remorse or compassion for its victims. In The Duplicity of Philosophy's Shadow, Elliot R. Wolfson intervenes in a debate that has seen much attention in scholarly and popular media from a unique perspective, as a scholar of Jewish mysticism and philosophy who has been profoundly influenced by Heidegger's work.

Wolfson sets out to probe Heidegger's writings to expose what remains unthought. In spite of Heidegger's explicit anti-Semitic statements, Wolfson reveals some crucial aspects of his thinking--including criticism of the biological racism and militant apocalypticism of Nazism--that betray an affinity with dimensions of Jewish thought: the triangulation of the concepts of homeland, language, and peoplehood; Jewish messianism and the notion of historical time as the return of the same that is always different; inclusion, exclusion, and the status of the other; the problem of evil in kabbalistic symbolism. Using Heidegger's own methods, Wolfson reflects on the inextricable link of truth and untruth and investigates the matter of silence and the limits of speech. He challenges the tendency to bifurcate the relationship of the political and the philosophical in Heidegger's thought, but parts company with those who write off Heidegger as a Nazi ideologue. Ultimately, The Duplicity of Philosophy's Shadow argues, the greatness and relevance of Heidegger's work is that he presents us with the opportunity to think the unthinkable as part of our communal destiny as historical beings.