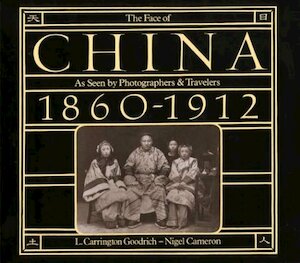 The Face of China

The Face of China is an evocative and candid collection of some of the first photographs made in that country. Along with descriptive captions, these images describe the daily life and surroundings of an era now passed.

The people are as seen through Western eyes, and the places are as traversed by foreigners. These early photographers were explorers and adventurers. They lugged huge cameras with heavy glass plates over rugged, unfamiliar terrain. Interspersed throughout the book are passages from significant texts and travelers' diaries, observations and opinions that echo and illuminate the images.

For many Chinese, these photographers were the first white faces ever seen, and they carried with them previously undreamed-of contraptions. For all this, there is an unguarded air to many of the portraits, and the street scenes have the candid look of today's street photographer.