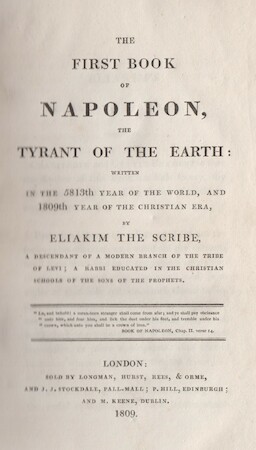 The first book of Napoleon, the tyrant of the earth

First edition. Account of the Napoleonic Wars written in the style of the King James Bible. The narrative opens with a description of the French Revolution and goes on to describe Napoleon's rise to power, the start of hostilities between France and Britain, and various events of the war, including the destruction of the French fleet at the Battle of the Nile. The work concludes with a parable, a vision given to Eliakim, and Eliakim's warnings and admonitions to the people of Albion (Britain).

Contemporary full calf, flat spine with gilt ruling and title label. Spine slightly rubbed, some browning to the endpapers, scattered foxing at the beginning and end, but generally a clean copy. Bookplate of John Rutherfurd on front pastedown. Armorial bookplate of Cornelius Verheyden de Lancey on recto of front flyleaf.