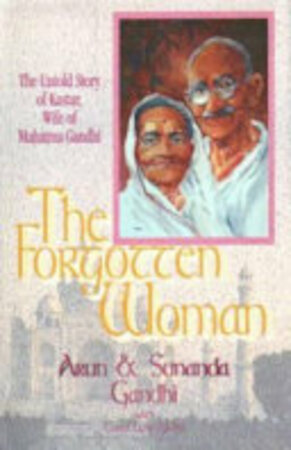 Arun Gandhi is the fifth grandson of Mahatma (Mohandas) and Kastur Gandhi through his second son Manilal Gandhi. Together with his late wife Sunanda, the couple have generated an extraordinary read in The Forgotten Woman: The Untold Story of Kastur Gandhi. Here is a book that is not only informative and accessible, but also graced by an elegance and sensitive understanding of a grandmother who was far from being ignorant or clueless a propos the importance of her husband's mission in life. Kastur Gandhi wife of Mahatma Gandhi. Arun informs his readers in the introduction that he refuses to believe that his grandmother Kastur was incompetent as this was not his experience, nor that of his parents. Although she may not have been formally educated and could not read or write, upon reading this fascinating book we discover she certainly was far from being an unaware and a blundering fool. And as Arun states: "without her unstinted cooperation Grandfather could not have achieved the spiritual heights that he did." Beginning with an account of the Satyagraha struggle which Gandhi led in South Africa for seven years, Kastur had to give up a great deal and make sacrifices while living an austere life that many a woman would have rebelled against and probably would have also thrown out their husbands. There is even an anecdote where Mahatma wanted to turf out Kastur from their home. Perhaps initially she may not have understood her husband's technique of passive resistance that ruled out both verbal and physical violence, however, eventually she did come around to accept its principles as she championed it and embraced it whole heartedly. As Arun mentions, "that even though she could not, on her own account, accept any of her husband's peculiar new notions unless she was convinced he was right, she would always try to understand his way of thinking and, whenever possible, acquiesce to his wishes." What I found astonishing was her acceptance of her husband's harsh and sometimes cruel treatment of their children, herself, relatives and others.