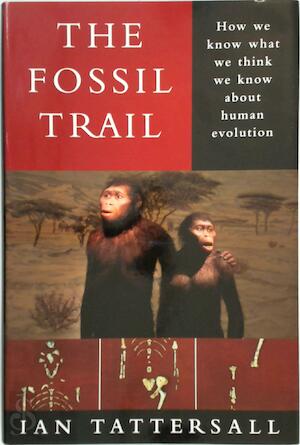 One of the most remarkable fossil finds in history occurred in Laetoli, Tanzania, in 1974, when anthropologist Andrew Hill (diving to the ground to avoid a lump of elephant dung thrown by a colleague) came face to face with a set of ancient footprints captured in stone--the earliest recorded steps of our far-off human ancestors, some three million years old. Today we can see a recreation of the making of the Laetoli footprints at the American Museum of Natural History, in a stunning diorama which depicts two of our human forebears walking side by side through a snowy landscape of volcanic ash. But how do we know what these three-million-year-old relatives looked like? How have we reconstructed the eons-long journey from our first ancient steps to where we stand today? In short, how do we know what we think we know about human evolution? In The Fossil Trail, Ian Tattersall, the head of the Anthropology Department at the American Museum of Natural History, takes us on a sweeping tour of the study of human evolution, offering a colorful history of fossil discoveries and a revealing insider's look at how these finds have been interpreted--and misinterpreted--through time. All the major figures and discoveries are here. We meet Lamarck and Cuvier and Darwin (we learn that Darwin's theory of evolution, though a bombshell, was very congenial to a Victorian ethos of progress), right up to modern theorists such as Niles Eldredge and Stephen Jay Gould. Tattersall describes Dubois's work in Java, the many discoveries in South Africa by pioneers such as Raymond Dart and Robert Broom, Louis and Mary Leakey's work at Olduvai Gorge, Don Johanson's famous discovery of "Lucy" (a 3.4 million-year-old female hominid, some 40% complete), and the more recent discovery of the "Turkana Boy," even more complete than "Lucy," and remarkably similar to modern human skeletons. He discusses the many techniques available to analyze finds, from fluorine analysis (developed in the 1950s, it exposed Piltdown as a hoax) and radiocarbon dating to such modern techniques as electron spin resonance and the analysis of human mitochondrial DNA. He gives us a succinct picture of what we presently think our "family tree" looks like, with at least three genera and perhaps a dozen species through time (though he warns that this greatly underestimates the actual diversity of hominids over the past two million or so years). And he paints a vivid, insider's portrait of paleoanthropology, the dogged work in the broiling sun, searching for a tooth, or a fractured corner of bone, amid stone litter and shadows, with no guarantee of ever finding anything. And perhaps most important, Tattersall looks at all these great researchers and discoveries within the context of their social and scientific milleu, to reveal the insidious ways that the received wisdom can shape how we interpret fossil findings, that what we expect to find colors our understanding of what we do find. Refreshingly opinionated and vividly narrated, The Fossil Trail is the only book available to general readers that offers a full history of our study of human evolution. A fascinating story with intriguing turns along the way, this well-illustrated volume is essential reading for anyone curious about our human origins.