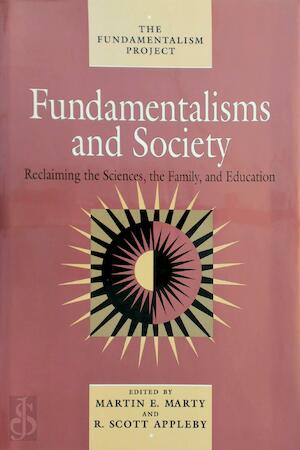 Reclaiming the Sciences, the Family, and Education

The Fundamentalism Project Edited by Martin E. Marty and R. Scott Appleby Around the world, fundamentalist movements are profoundly affecting the way we live. Misinformation and misperception about fundamentalism exacerbate conflicts at home and abroad. Yet policymakers, journalists, students, and others have lacked any comprehensive resource on the explosive phenomenon of fundamentalism. Now the Fundamentalism Project has assembled an international team of scholars for a multivolume assessment of the history, scope, sources, character, and impact of fundamentalist movements within the world's major religious traditions. Fundamentalisms and Society shows how fundamentalist movements have influenced human relations, education, women's rights, and scientific research in over a dozen nations and within the traditions of Islam, Judaism, Christianity, Buddhism, and Hinduism. Drawn from the fields of anthropology, sociology, history of religion, and history of science, the contributors cover topics such as the educational structures of Hindu revivalism, women in fundamentalist Iran and Pakistan, and the creationist cosmos of Protestant fundamentalism. In a concluding essay, William H.
McNeill situates contemporary fundamentalisms within a world historical context. The Fundamentalism Project, Volume 2 Martin E. Marty and R. Scott Appleby direct the Fundamentalism Project. Marty, the Fairfax M. Cone Distinguished Service Professor of the History of Modern Christianity at the University of Chicago, is the senior editor of the Christian Century and the author of numerous books, including the multivolume Modern American Religion, also published by the University of Chicago Press. Appleby, a research associate at the University of Chicago, is the author of "Church and Age Unite!" The Modernist Impulse in American Catholicism.