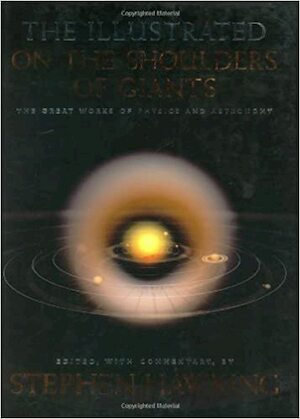 The illustrated on the shoulders of giants

the great works of physics and astronomy

The first edition of this revolutionary look at the scientific discoveries that changed our perception of the world, by the renowned physicist and bestselling author Stephen Hawking, sold over 65,000 copies. Now it’s available in a gift-worthy special edition with color photographs and illustrations depicting theoretical models of the planets and their orbits—making Hawking’s brilliant insights all the more accessible. This original compilation is based on seven classic works of physics and astronomy which, read in chronological order, trace the evolution of modern science. THE ILLUSTRATED ON THE SHOULDERS OF GIANTS includes selections from On the Revolution of Heavenly Spheres by Nicolaus Copernicus; Principia by Sir Isaac Newton; The Principle of Relativity by Albert Einstein; Dialogues Concerning Two Sciences by Galileo Galilei with Alfonso De Salvio; plus Harmony of the World by Johannes Kepler. It also includes five important critical essays and an original biography of each physicist, written by Hawking himself.