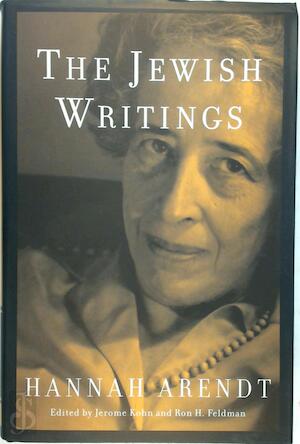 Although Hannah Arendt is not primarily known as a Jewish thinker, she probably wrote more about Jewish issues than any other topic. When she was in her mid-twenties and still living in Germany, Arendt wrote about the history of German Jews as a people living in a land that was not their own. In 1933, at the age of twenty-six, she fled to France, where she helped to arrange for German and eastern European Jewish youth to quit Europe and become pioneers in Palestine.During her years in Paris, Arendt’s principal concern was with the transformation of antisemitism from a social prejudice to a political policy, which would culminate in the Nazi “final solution” to the Jewish question–the physical destruction of European Jewry. After France fell at the beginning of World War II, Arendt escaped from an internment camp in Gurs and made her way to the United States. Almost immediately upon her arrival in New York she wrote one article after another calling for a Jewish army to fight the Nazis, and for a new approach to Jewish political thinking. After the war, her attention was focused on the creation of a Jewish homeland in a binational (Arab-Jewish) state of Israel. Although Arendt’s thoughts eventually turned more to the meaning of human freedom and its inseparability from political life, her original conception of political freedom cannot be fully grasped apart from her experience as a Jew. In 1961 she attended Adolf Eichmann’s trial in Jerusalem. Her report on that trial, Eichmann in Jerusalem, provoked an immense controversy, which culminated in her virtual excommunication from the worldwide Jewish community. Today that controversy is the subject of serious re-evaluation, especially among younger people in America, Europe, and Israel.The publication of The Jewish Writings–much of which has never appeared before–traces Arendt’s life and thought as a Jew. It will put an end to any doubts about the centrality, from beginning to end, of Arendt’s Jewish experience.