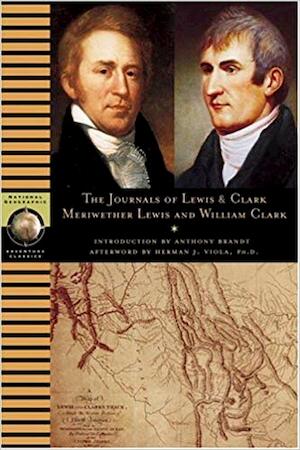 The Journals of Lewis and Clark

At the dawn of the 19th century, Meriwether Lewis and William Clark embarked on an unprecedented journey from St. Louis, Missouri to the Pacific Ocean and back again. Their assignment was to explore the newly acquired Louisiana Territory and record the geography, flora, fauna, and people they encountered along the way. The tale of their incredible journey, meticulously recorded in their journals, has become an American classic.

This single-volume, landmark edition of the famous journals is the first abridgement to be published in at least a decade. Series editor Anthony Brandt and Lewis and Clark scholar Herman J. Viola have reviewed all 13 volumes of the text to include a more balanced account of encounters with Native Americans and have, for the first time in print, corrected Lewis and Clark’s famously bad spelling. This new edition presents the journey’s impressive highlights—from first encounters with grizzly bears and meetings with the Sioux and Crow Indians, to the near starvation in the Bitterroot Mountains and confrontation with the Blackfeet Indians. Brief connecting accounts from the editors seamlessly link connected passages and illuminate details of the expedition that are missing or obscure in the text.

Featuring an expedition map, an introduction by Anthony Brandt that describes America at the start of Lewis and Clark’s amazing journey, and an afterword by Herman Viola that illuminates the historical significance of the mission, this single-volume edition brings to life the epic grandeur of the greatest adventure in American history.