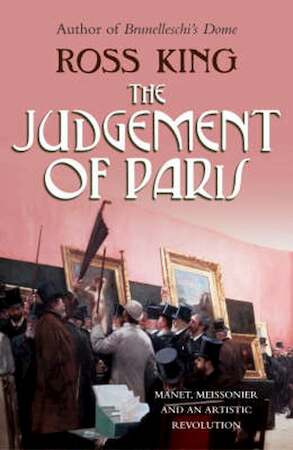 The Judgement of Paris

It is hard to believe it now, but in 1863, the French painter Ernest Meissonier was one of the most famous artists in the world. The darling of the 'Salon' - that all-important public exhibition of Art held biannually in Paris - he painted historical subjects in meticulous detail and sold his works for astronomical sums to collectors who included Napoleon III himself. Manet, on the other hand, was struggling in obscurity. Famous today as the 'Father of Impressionism', when this book opens he was known only as the sloppy painter of a few much-derided canvases depicting bourgeois gentlemen in top hats and Absinthe-drinking beggars. With his usual narrative brilliance, and eye for telling detail, Ross King has taken the parallel careers of Meissonier and Manet and used them as a lense for their times. Beginning with the year that Manet exhibited his ground-breaking 'D jeuner sur l'herbe' and ending in 1874, with the first 'Impressionist' exhibition, King plunges us into Parisian life - on the streets and in the corridors of power - during a ten-year period full of social and political ferment. These were the years in which Napoleon III's censorious and pleasure-seeking Second Empire fell from its heights into the ignominy of the Franco-Prussian war and the ensuing Paris Commune of 1871. But also when a group of artists, with Manet at the vanguard, began to challenge the establishment by refusing to paint classical or historical subjects and, instead, turning to the landscapes and ordinary people they saw around them. Benign as such paintings might seem today, they helped change the course of history. The struggle between Meissonier and Manet to get their paintings exhibited in pride of place at the Salon was not just about Art, it was about how to see the world.