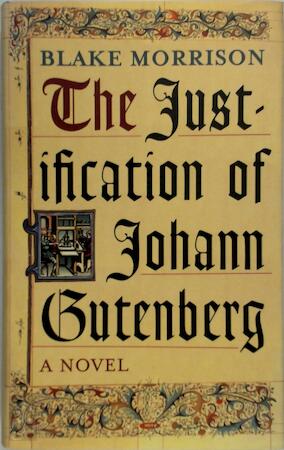 The Justification of Johann Gutenberg

In the year 1400, in the city of Mainz, a man was born whose heretical invention was to change history. Sixty odd years later he died - bankrupt, robbed of his business, his printing presses, his good name and, so he thought, immortality. Reading between the lines of history, Blake Morrison has woven a stunning novel around the few facts that are known about the life and work of Johann Gensfleisch of Gutenberg, master printer, charmer, conman and visionary - the man who invented 'artifical writing', first printed a Latin grammar and then the 'Gutenberg' Bible, putting thousands of monks out of work. In a first novel that is dazzling in its artistry and delicacy, and pure enchantment for the reader, Morrison gives us Gutenberg's 'testament'. Gutenberg dictates his justification and apologia - ironically enough - to pretty young scribes, who have the power not only to reject an old man's advances but also to change his words, since with his failing eyesight he can barely read them. Through the words he puts into the mouth of this endearing, maddening, touching creation Morrison conjures up a noisy, colourful, plague-ridden fifteenth-century world in the rival cities of Mainz and Strasbourg, as well as in the wider European world beyond, from the flourishing cities of the Rhine to the lowland plains in the North.