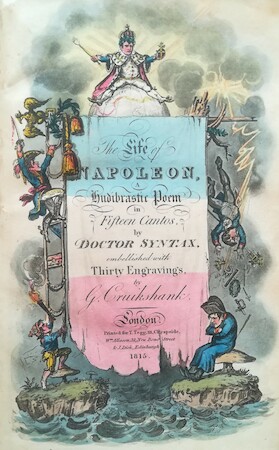 The Life of Napoleon, a Hudibrastic Poem in Fifteen Cantos

First edition. Illustrates Napoleon's life from dreaming in his cell at the military college to his landing at Elba. George Cruikshank (1792-1878) was the foremost British illustrator and caricaturist of the 1800s. During his career, he produced well over 10.000 drawings and etchings ranging from book illustrations to political caricatures and social satire. Napoleon was one of his favorite targets. Ref. Tooley 151