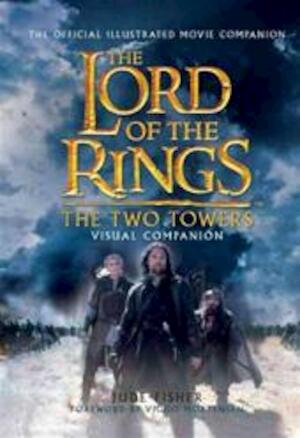 The lord of the rings

The official, fully authorized companion to the second part of Peter Jackson's award-winning trilogy, The Lord of the Rings.The Two Towers Visual Companion is a full-color guide to the characters, places and landscapes of J.R.R. Tolkien's Middle-earth as depicted in the second film in The Lord of the Rings Trilogy, and features a special introduction by Viggo Mortensen, who plays Aragorn.Lavishly illustrated with more than 100 full-color photographs, including exclusive images of Gollum, Treebeard and the battle of Helm's Deep, The Two Towers Visual Companion offers a privileged tour through the principal events of the second film. It begins with a recounting of The Fellowship of the Ring, and then takes the reader on the separate journeys undertaken by the Fellowship in The Two Towers.The Ring Quest: in which Frodo and Sam journey alone towards Mordor, alone that is, except for the sneaking figure of Gollum, who has been dogging their footsteps since Moria.The Captives' Journey: in which Merry and Pippin are carried by the fearsome Uruk-hai towards a fateful encounter with the wizard, Saruman, at the stronghold of Isengard.The Companions' Journey: in which Aragorn, Legolas and Gimli pursue the abducted hobbits across the Plains of Rohan and into the eaves of Fangorn Forest.Also included are a brand new map of Rohan and Gondor and a specially commissioned battle plan of the climactic events at Helm's Deep, where a brave stand will be made by the Free Peoples of Middle-earth against Saruman's horde.The companion offers an unforgettable tour of the haunted swamp of the Dead Marshes and the lovely but dangerous land of Ithilien which borders Mordor, the breathtaking kingdom of Rohan, home of the Horse-lords, its seat of power, Edoras, and the ancient stronghold of Helm's Deep, and provides an invaluable introduction to Peter Jackson's The Two Towers.

"The lord of the rings" is ook verkrijgbaar als