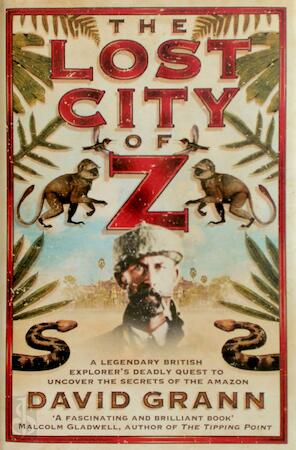 The Lost City of Z

A stirring tale of lost civilizations, avarice, madness and everything else that makes exploration so much fun. As New Yorker staff writer and debut author Grann notes, the British explorer Percy Fawcett's exploits in jungles and atop mountains inspired novels such as Arthur Conan Doyle's The Lost World, and his character is the tutelary spirit of the Indiana Jones franchise. Fawcett in turn was nurtured by his associations with fabulists such as Doyle and H. Rider Haggard, whose talisman he bore into the Amazonian rainforest. Working from a buried treasure in the form of long-lost diaries, Grann reconstructs the 1925 voyage Fawcett undertook with his 21-year-old son to find the supposed Lost City of Z, which, by all accounts, may have been El Dorado, the fabled place of untold amounts of Inca gold. Many a conquistador had died looking for the place, though in their wake, "after a toll of death and suffering worthy of Joseph Conrad, most archaeologists had concluded that El Dorado was no more than a delusion." Fawcett was not among them, nor was his rival, a rich American doctor named Alexander Hamilton Rice, who was hot on the trail. Fawcett determined that a small expedition would be more likely to survive than a large one. Perhaps so, but the expedition notes record a hell of humid swamps and "flesh and carrion-eating bees [and] gnats in clouds rendering one's food unpalatable by filling it with their filthy bodies, their bellies red and disgustingly distended with one's own blood." It would get worse, we imagine, before Fawcett and his party disappeared, never to be seen again. Though, as Grann writes, they were ironically close to the object of their quest. A colorful tale of true adventure, marked by satisfyingly unexpected twists, turns and plenty of dark portents.

"The Lost City of Z" is ook verkrijgbaar als