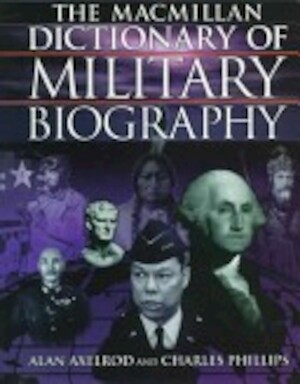 The Macmillan Dictionary of Military Biography

Who are the most influential military figures of all time? In "The Macmillan Dictionary of Military Biography" you will find over 500 of the leaders and soldiers who helped shape human history. From around 3500 B.C. (roughly the beginning of recorded history) to the present, nothing has been more costly in money, resources, effort, pain and life than war, and here you will find the stories of the men (and one woman, Joan of Arc) whose actions influenced the lives of those around them. Learn more about great rulers like Henry II, perhaps the greatest king of England, who warred successfully against France, Ireland, Scotland, and Wales. Learn more about great strategists such as the 1st Duke of Marlborough and his victory at Blenheim, or Mustafa Kemal Ataturk, whose handling of the attack at Gallipoli helped him to later overthrow the Ottoman Empire. And with the book s American focus, find out more about some of the great military figures of America s history, from Joseph Brant s role in the French and Indian Wars to Omar Bradley s successful innovations in World War II. Each entry includes with a concise statement of the subject s significance to military history, biographical and military overviews, and an essay that presents a miniature portrait of the subject s character and weighs his significance in history. This series of military biographies illuminates the many conflicts that have influenced ancient and modern history, and provides an invaluable and entertaining resource for military enthusiasts and historians alike.