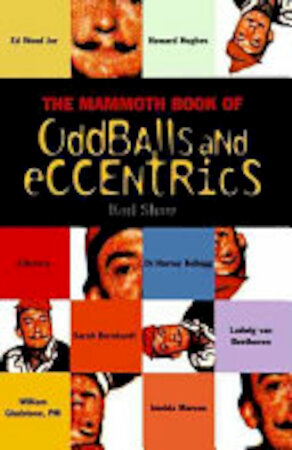 The Mammoth Book of Oddballs and Eccentrics

Howard Hughes, Liberace, Imelda Marcos, Sarah Bernhardt, Ed Wood, Jr., Ludwig von Beethoven -- they're all here, along with an astonishing assortment of other oddballs, kooks, dreamers, despots, prophets, performers, royals, politicians, inventors, philosophers, writers, artists, and more garden-variety eccentrics. Here, too, are the phobias, compulsions, odd beliefs, and weird habits that have placed them in the ranks of the bizarre, curious, and strange. You will discover, for instance, that Elvis Presley was convinced he could turn Graceland's sprinkler system on and off by the sheer power of concentration, that Salvador Dali ate vast quantities of Camembert cheese before bedtime to make his dreams more vivid, that Florence Nightingale carried a miniature pet owl in her pocket, while Kaiser Wilhelm II always carried with him photos of his deceased relatives in their funeral attire. You will learn, too, that the Victorian judge Lord Monboddo spent his entire life convinced that babies were born with tails (which midwives cut off), and that John Harvey Kellogg of cereal fame spent his wedding night writing an essay on the evils of sexual intercourse. Throughout the pages of this mammoth book you'll find impulses, whims, obsessions, and hangups as skewed as the schemes of Francisco Lopez, the Paraguay president who attempted to rout the Brazilian army with a battalion of small boys wearing false beards. You'll find cases galore that are screwier, too.