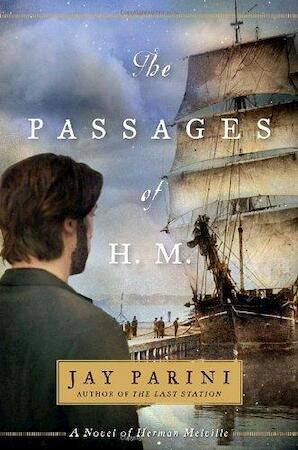 The Passages of H.M.

From the author of the international bestseller The Last Station, a stirring novel about the adventurous life and tragic literary career of Herman Melville.

As The Passages of H. M. opens, we see, through the eyes of his long-suffering wife Lizzie, an aging, angry, and drunken Herman Melville wreaking domestic havoc in his unhappy New York home. He is decades past his flourishing career as a writer of bestselling tales of seagoing adventures like Typee and Omoo. His epic but ungainly novel Moby-Dick was meant to make him immortal, but critics scoffed and readers fled. His days are spent trudging the docks of New York as a customs inspector and contemplating his malign literary fate. But within him is stirring, perhaps, one great work yet—the tale of a handsome sailor in the Napoleonic Wars, undone by one moment of uncontrollable rage . . .

Lizzie’s chapters alternate with third-person accounts of Melville’s crowded life: his shipping off to sea on a merchant vessel as an impoverished young aristocrat; his fateful voyage on a whaling ship; his desertion in the Marquesas Islands and sojourn with cannibals—a great adventure and polymor­phous sexual idyll—and his instant fame as a novelist; his fateful encounter and soul-deep friendship with Nathaniel Hawthorne; and the long years of physical decline and liter­ary obscurity.

Jay Parini creates a Melville who is at once sympathetic and maddening, in sync with the vast forces of the universe and hopelessly impractical and abstracted. And one who, in thought and deed, is unambiguously attracted to men—a surmise well supported by the known biographical facts but still sure to cre­ate controversy. Parini penetrates the mind and soul of a liter­ary titan, using the resources of fiction to humanize a giant while illuminating the sources of his matchless creativity.