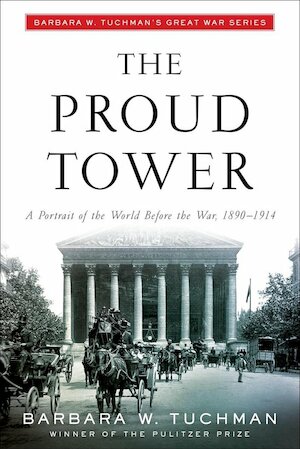 The fateful quarter-century leading up to the World War I was a time when the world of Privilege still existed in Olympian luxury and the world of Protest was heaving in its pain, its power, and its hate. The age was the climax of a century of the most accelerated rate of change in history, a cataclysmic shaping of destiny.
In The Proud Tower, Barbara Tuchman concentrates on society rather than the state. With an artist's selectivity, Tuchman bings to vivid life the people, places, and events that shaped the years leading up to the Great War: the Edwardian aristocracy and the end of their reign; the Anarchists of Europe and America, who voiced the protest of the oppressed; Germany, as portrayed through the figure of the self-depicted Hero, Richard Strauss; the sudden gorgeous blaze of Diaghilev's Russian Ballet and Stravinsky's music; the Dreyfus Affair; the two Peace Conferences at the Hague; and, finally, the youth, ideals, enthusiasm, and tragedy of Socialism, epitomized in the moment when the heroic Jean Jaurè s was shot to death on the night the War began and an epoch ended.