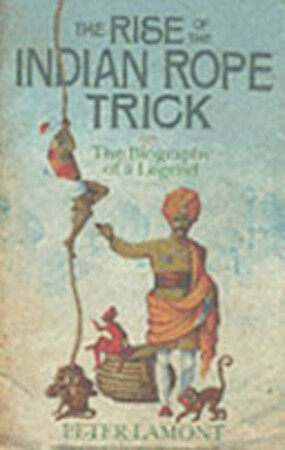 The Rise of the Indian Rope Trick

We assume that the Indian rope trick is a piece of ancient Hindu magic. But think again: it is actually the product of a hoax which appeared in the Chicago Tribune in 1890.
This wonderfully researched, playfully written book takes us on a journey through Victorian society where we discover the interest in magic of Charles Dickens; Alfred Russell Wallace; Edward, Prince of Wales; Lord Northbrook and Charles Darwin. We learn how in an age of reason the British came to love all things Oriental and how the legend of the rope trick came to be perpetuated throughout the 20th century as fanatical public figures and aristocrats went to India in search of it and returned claiming to have seen it being performed.
This is a charming history book filled with colourful characters, known and unknown, all of whom pursued an obsession. Some were respected members of society, some were incredibly eccentric and utterly deluded. It is set against the background of Victorian society and shows how the writing of history itself can perpetuate myths and legends.