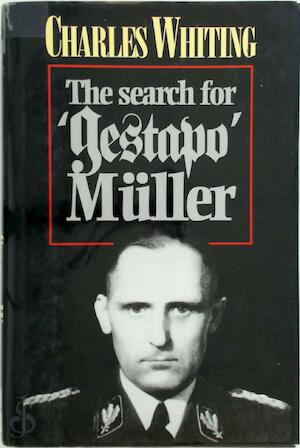 The Search for Gestapo Muller

The Man Without a Shadow

On April 29th, 1945, General Heinrich Gestapo Muller, head of that feared Nazi organisation, left Hitler's bunker and disappeared. Today over a half a Century later, he is still carried on the books of the German Office of Investigation of Nazi war crimes as their No. 1 wanted man - The question is why? For nearly five years Muller had the power of life-and-death over 300 million Europeans in Occupied Europe. In that time not only did he play a major role in the Holocaust but he helped in kidnapping of Payne, Stevens and Best, chiefs of the SIS in Europe; had a hand in the planned abduction of the Duke of Windsor; broke the power of the European-Soviet spy ring the 'Red Orchestra'; terrorised the French resistance; shot British SAS and SOE prisoners and master-minded the executions of the Great Escape POW escapees. But was he all the time working for the Russians, and if so, what happened to him on that April day? His subordinate Eichmann escaped as did other top Gestapo officials. Did he really die in Berlin? In his search for the truth the Author takes an interesting and exciting stance.
He examines, with typical thoroughness, both Muller's career as it progresses from being a simple Bavarian policeman through to becoming a top Third Reich's henchman and the Allies post-war efforts to find out if Muller survived. The Search for Gestapo Muller is a truly intriguing modern mystery story.