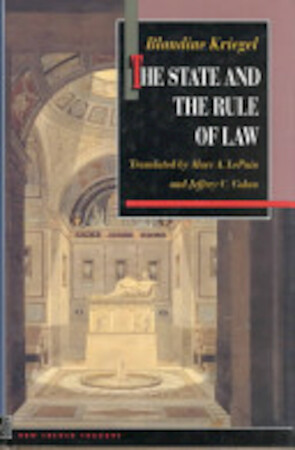 The State and the Rule of Law

Blandine Kriegel, at one time a collaborator with Michel Foucault, is one of France's foremost political theorists. This translation of her celebrated work L'Etat et les esclaves makes available for English-speaking readers her impassioned defense of the state. Published in France in 1979 and republished in 1989, this work challenged not only the anti-statism of the 1960s but also generations of romanticism in politics that, in Kriegel's view, inadvertently threatened the cause of liberty by refusing to distinguish between the despotic and the lawful state.In a work that addresses the urgent concerns of Europe and the contemporary world as a whole, Kriegel examines the background of modern liberal democracy in the late seventeenth and eighteenth centuries and argues cogently for the future of constitutional social-democracy. She maintains, among other positions, that European liberal democracies would have been impossible without the political basis provided by the lawful state first developed by monarchies. She also shows that early modern centralized states became liberal insofar as they developed a centralized legal system, rather than a centralized administration. In developing these ideas, she presents a picture of the state as a major force for human liberty.